Birth: 1607 in Wales
Note: “James Morgan, the common ancestor was born in Wales, in 1607, but in what precise locality our progenitor first saw the light is uncertain, though probably in Llandaff, Glamorgan Co. The family appears to have removed from Llandaff to Bristol, Eng. on the opposite side of Bristol Channel, a short time at least, perhaps a few years, prior to 1636. The name of his father is unknown, but there is some traditionary evidence that it was William.” – Morgan, Nathaniel H. Morgan genealogy : A history of James Morgan, of New London, Conn., and his descendants; from 1607 to 1869.

Note: James Morgan, is first recorded in Roxbury, Massachusetts. On Aug. 6, 1640, he married there, Margery Hill, of Roxbury. His children were all born there. He signed the freeman’s oath in Roxbury on May 10, 1643. He was an original donor of the Free School. He is named as a resident of Roxbury in the inventory of John Graves, dated 1646, and was a freeholder there as late as 1650.

Moved: 1650
Note: 1650 is the year he removed to Pequot, (now New London, Connecticut) and had a houselot assigned to him. Early in that year he had lands granted him at Pequot, which were soon after occupied by him as a homestead, “on the path to New street,”(now Ashcraft, There is a small park nearby named “Morgan Park.”) A further entry upon the record shows that “James Morgan hath given him about 6 acres of upland, where the wigwams were, in the path that goes from his house towards Culvers, among the rocky hills.” These tracts were located near the present Cedar Grove Cemetery, in the western suburbs of the city of New London. They were afterward considered sterile and dreary and, in a few years, were abandoned by their occupants for homes and better lands on the east side of the Thames River. James continued to occupy this homestead on the path to New Street until about March 1657.

Moved: 25 DEC 1656
Note: On Dec. 25, 1656, he sold his homestead and removed soon after, with several others, across the river, upon large tracts of land previously granted them by the town. James Avery, William Meades, and Nehemiah and John Smith, also had grants of land adjoining James. They were all among the first settlers, residents, and farmers on the east side of the river, which is now Groton.

Note: James was a large proprietor and dealer in lands. He was frequently employed by the public in land surveys, establishing highways, determining boundaries, adjusting civil difficulties as a magistrate. He was one of the “townsmen” or selectmen of New London for several years, and was one of the first Deputies sent from New London plantation to the General Court at Hartford for the May session, 1657, (at which date he deposed his age to be “about 50 years;”). He was nine times afterward chosen a member of that assembly, the last time in 1670. James Morgan was considered a man of honesty and integrity. In a controversy between the General Court and the New London plantation, about boundaries and jurisdiction, it was ordered that the matter be submitted to three arbiters, mutually agreed upon. New London at once named their townsman, James Morgan. The General Court promptly accepted him, and without naming another, agreed to submit to his sole decision, which when made, seems to have satisfied everyone.

Religion: He was an active and useful member of the church under Rev. Richard Blinman’s ministry.

Note: At one time he and Mr. Tinker and Obadiah Brown, were chosen to select the seats of people in the meeting house. In 1661, he was one of a committee of the General Court to lay out the bounds of New London, “on the east side of the Great River.” In 1662, he was one of a committee to contract “for building a house for the ministry,” at New London. As his son, James, approached maturity he is refered to as James Morgan Sr. In 1662, his worth on the town assessment list, stands the third highest in amount. The spot where he first built his house, resided and eventually died in Groton “is a few rods southeast of the present dwelling (1868) of Elijah S. Morgan, about 3 miles from Groton Ferry, on the road to Poquonoe Bridge.” Placement of his residence on modern maps (2014) is in the vicinity of Filter Plant Rd. in Groton, Connecticut, just southwest of the Avery-Morgan Cemetery.

Father is thought to be William Morgan 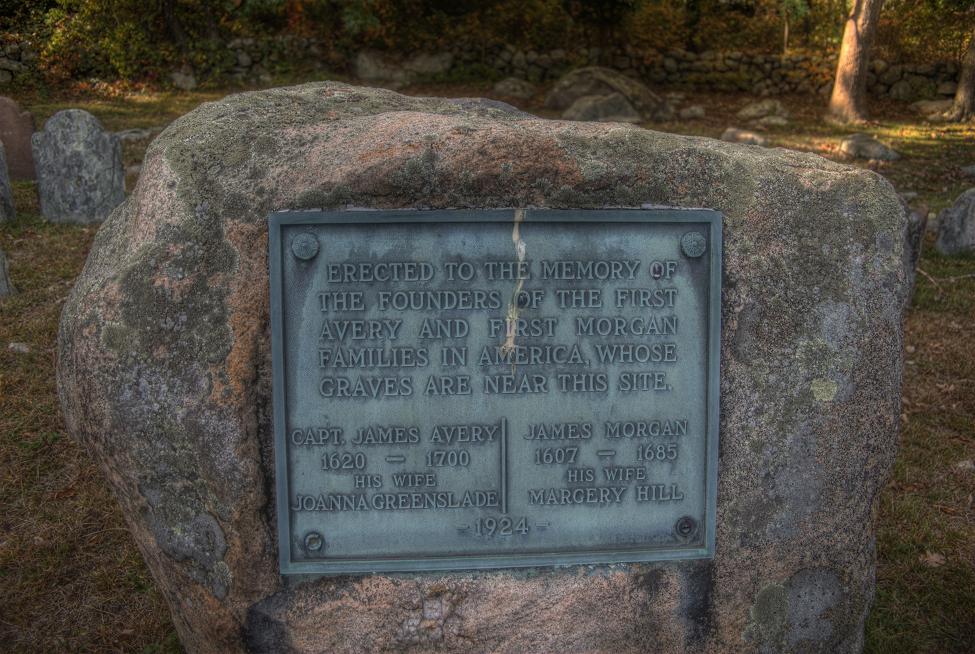