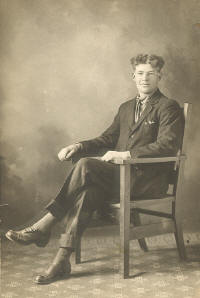 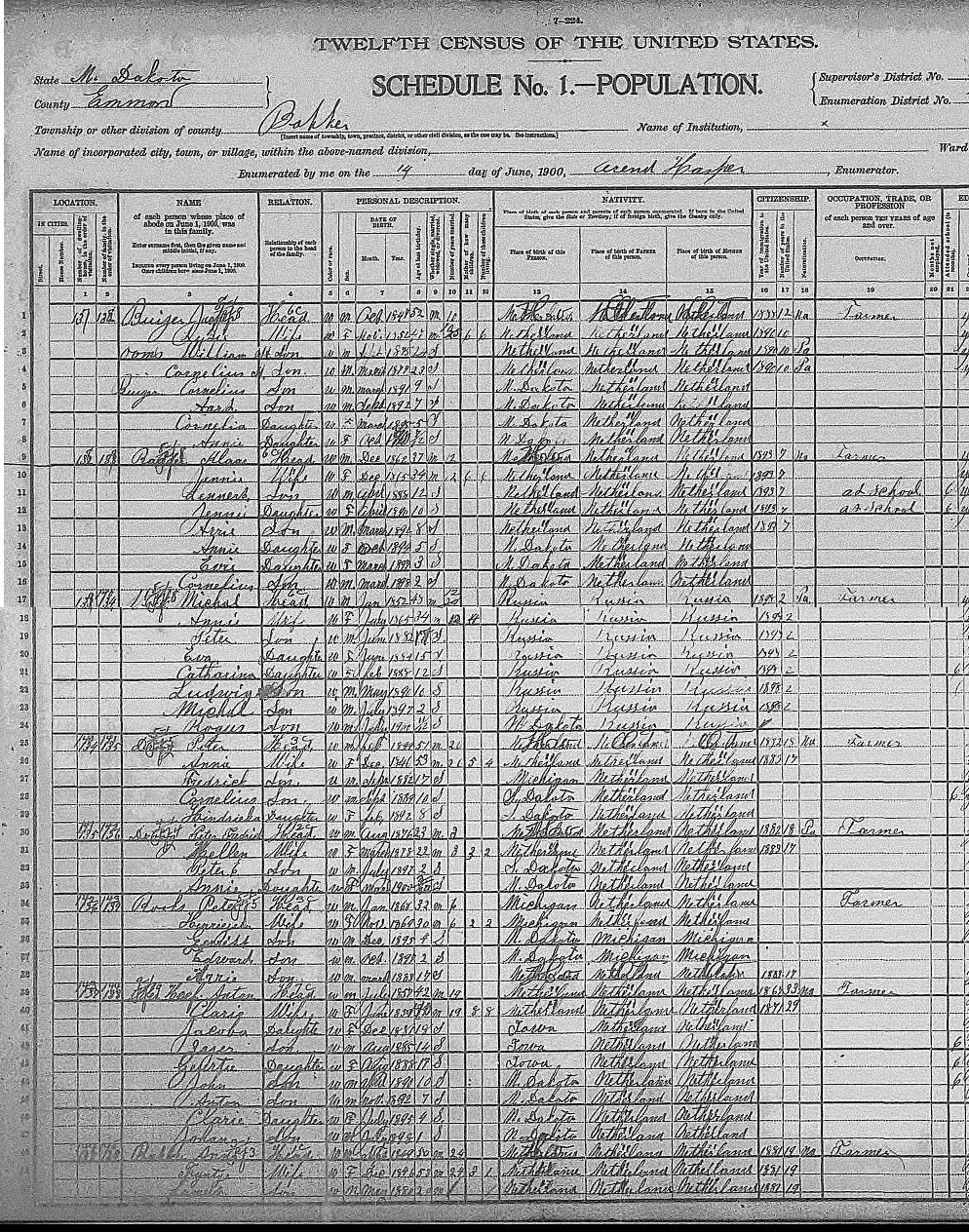 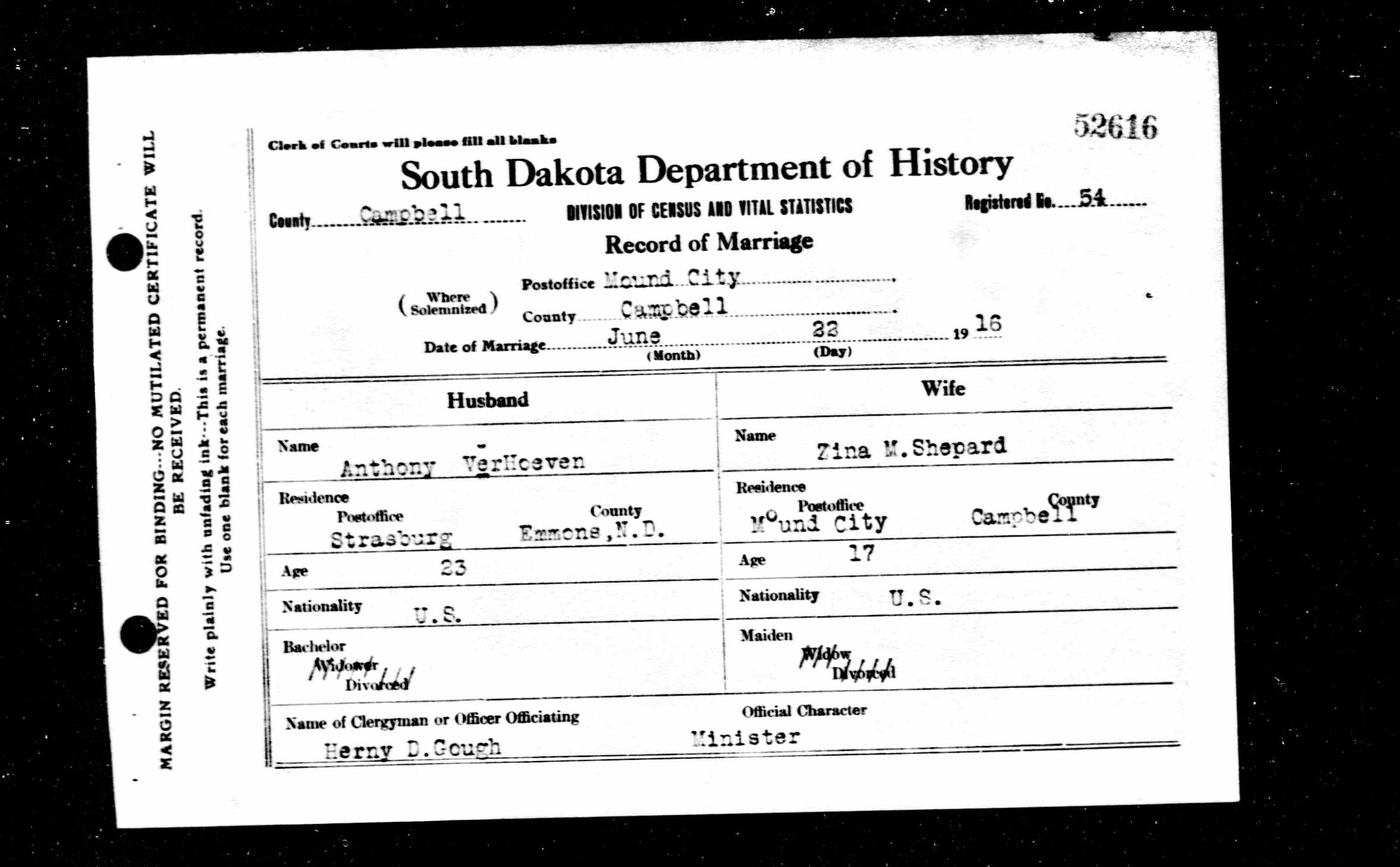 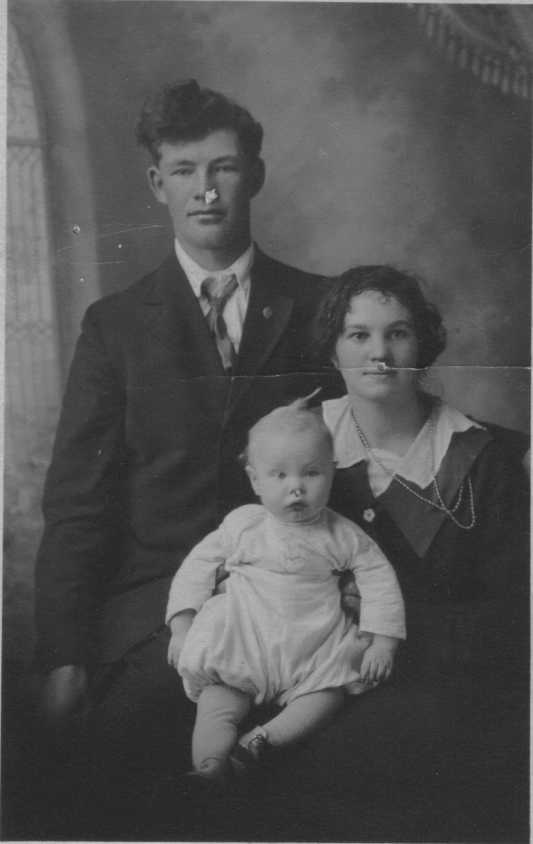 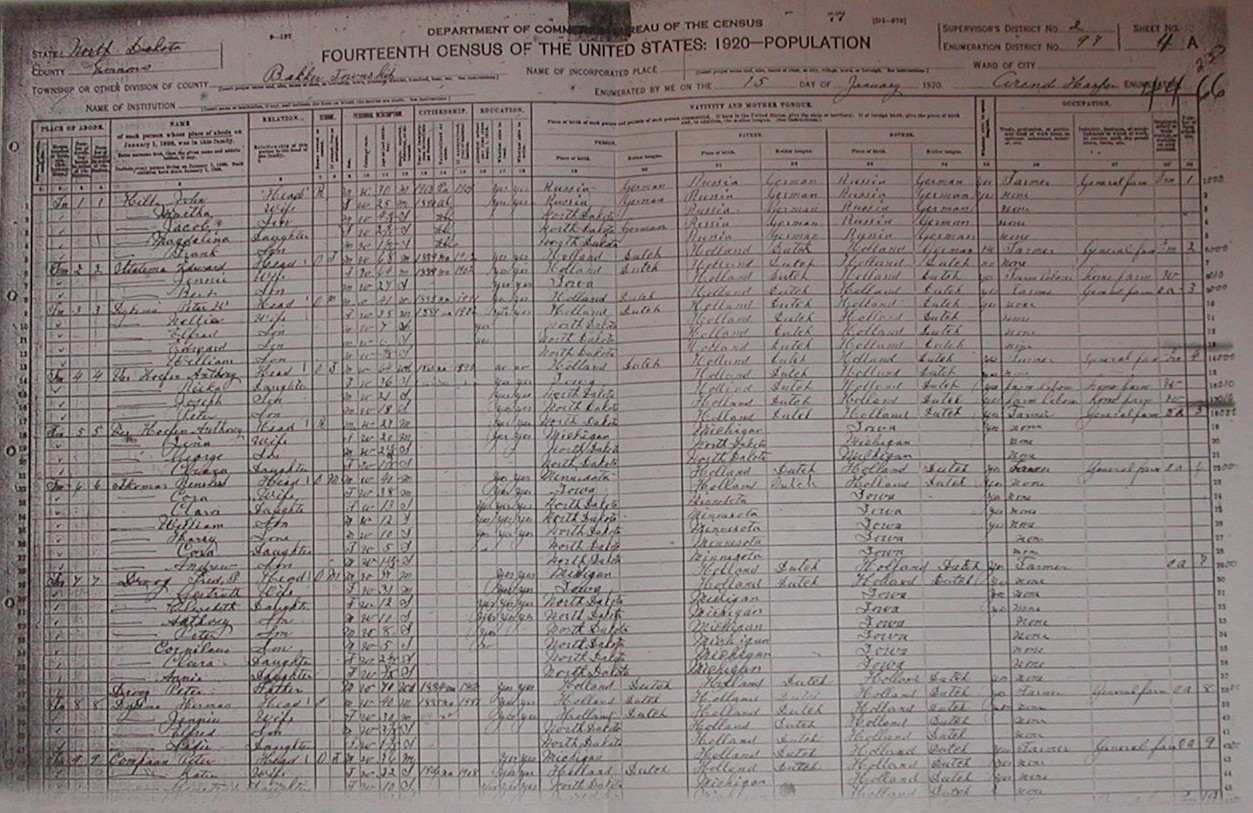 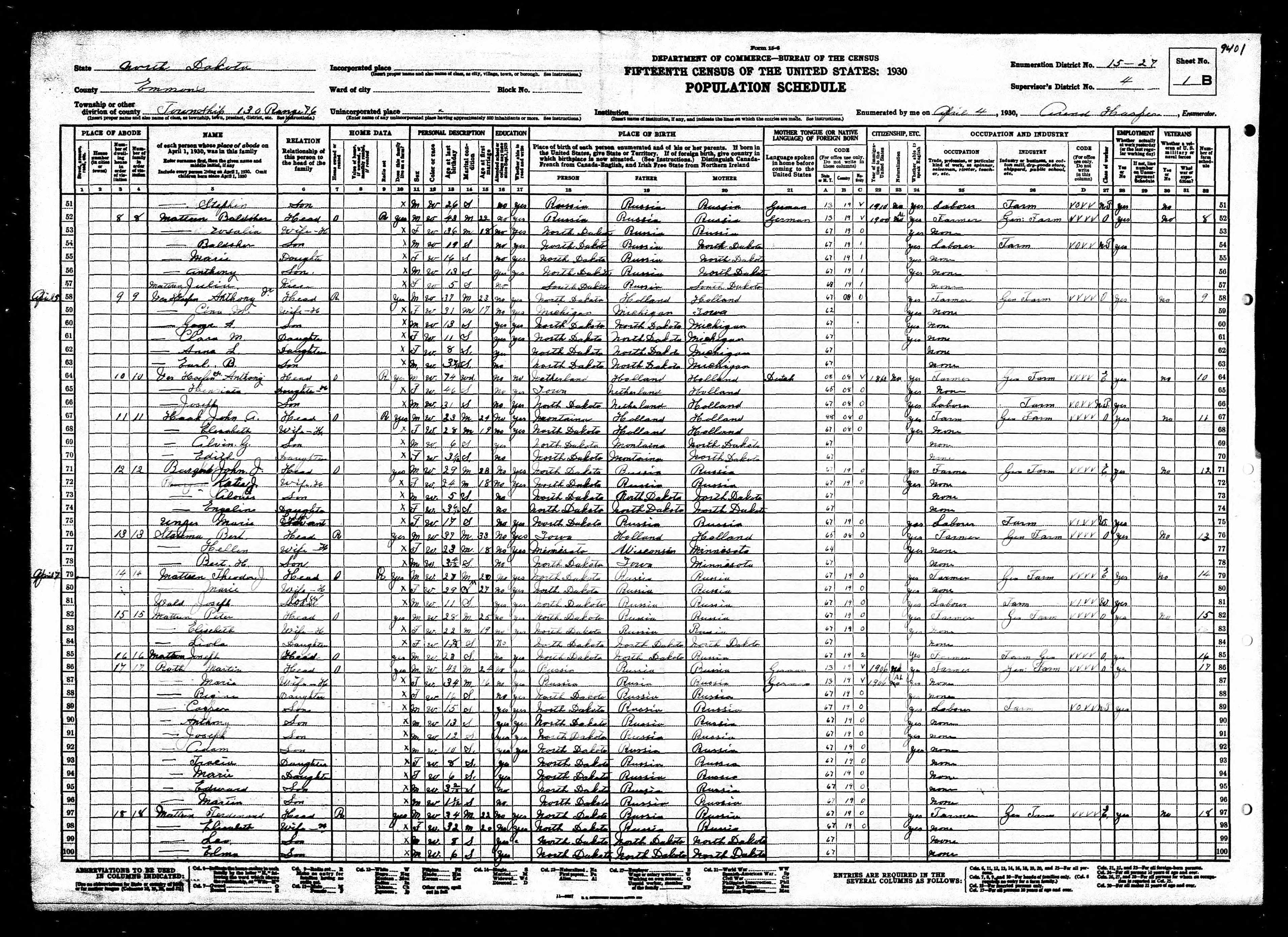 Pic of Anthony and Zina Mae 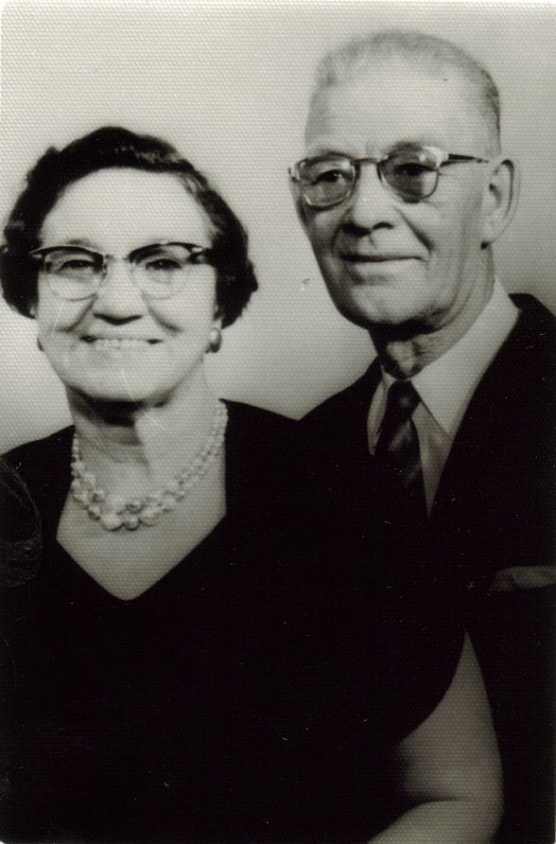 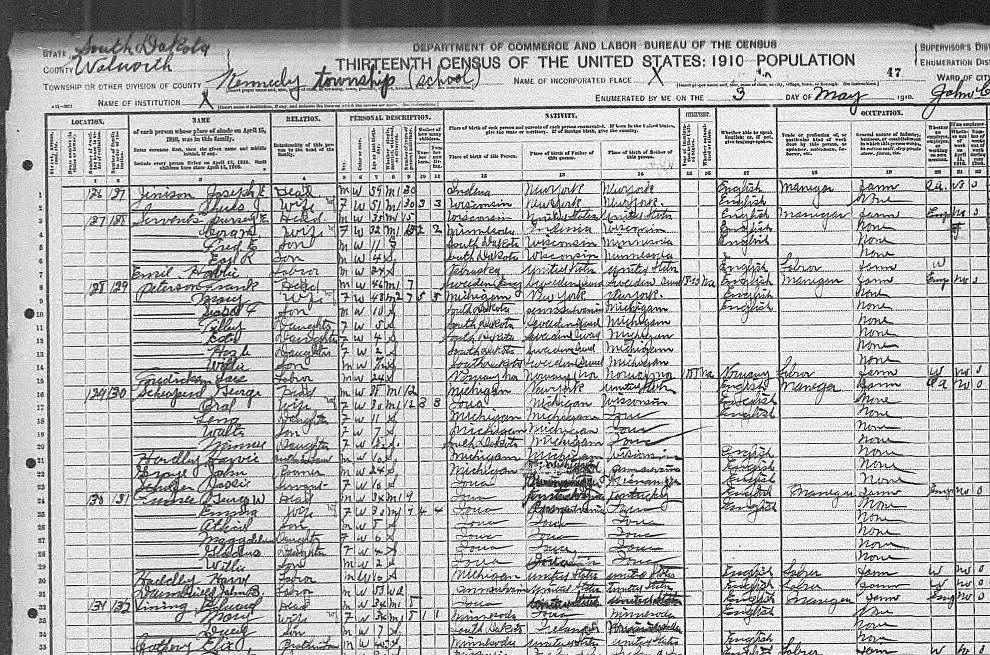 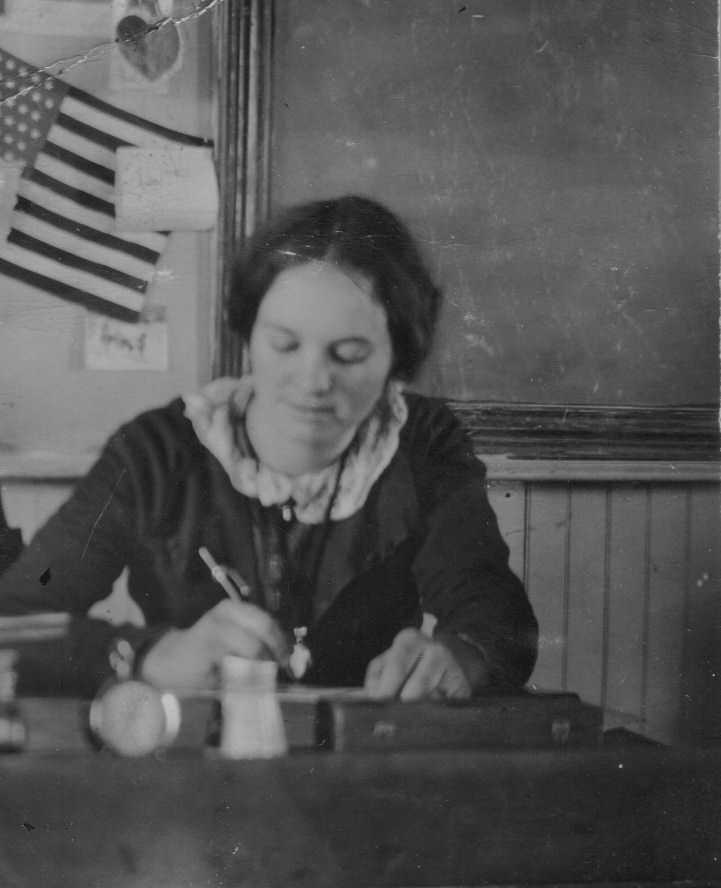 Pic of Zina Mae about age 16 in South Dakota

Note: I, Zina Mae Shepard VerHoeven, was born in Ingham County, near Williamston, Michigan on January 26, 1899 to George E. and Oril M. Shepard. I remember 3 different homes where we lived in Michigan, but when I was about 6 years old, my parents and baby brother Walter Duane, packed up our household goods and loaded them on a train to Glenham, South Dakota, where my father took up a government ‘claim’. We lived there for 5 years until it could be ‘farmed up’ and was his property, and could sell it.

My brother George Leo and Nettie M. were born in the sod house we lived in during those 5 years. We had 2 rooms, which was more than most people had, who lived in sod houses. I do not remember if we had a board floor or not, but do believe it was only a dirt floor packed down. The walls were 3 foot thick. The roof was also sodded over boards and tar paper. Grass grew thick and long in the roof so the rain did not soak through. We had 2 windows in the large room and only one in the smaller room. It was very warm in the winter and very cool in the summer.

After the five years there (early March), we packed our belongings in a bobsled and moved to Mound City SD to a farm about 50 miles away. The cows were tied to the back of the sled and my pony, Spot, was tied along one side of the team my father drove. We lived on this farm two years, then my father took a civil service examination and became a mail carrier on a rural route. My mother was his substitute. I finished my schooling and my Michigan born brother, Walter Duane, passed away in 1918 of the flu. My uncle, Harvey Hadley, lived with us for several years and later became my husband’s best man at our wedding.

In 1915, there was severe drought in SD, but there were good crops in ND about 25 miles from where we lived. My uncle headed north to hunt for work with 2 horses on his buggy – no cars then. He stopped at a farm about 9 miles north of the state line. The people on this farm happened to be the parents of our best friends who moved to Michigan in the fall of 1965, Mr. and Mrs. John VanBoven of Cutlerville, Michigan. Well anyway, to go back to my uncle, he asked these people if they knew of anyone who needed a hired man. Mr. VanBoven said ‘yes’. Mr. VerHoeven needed his and told him where to go to find the VerHoeven farm. When he got to the VerHoeven farm, no one was there. The VerHoevens were harvesting on one of the son’s farm. They were where they could see the farm. My uncle turned back south again instead heading on farther north when my future husband met him on horseback. He took my uncle along with him and he worked all through harvesting for the VerHoevens. Then he and my future husband started the ’rounds’ with the thrashing machine, both as pitchers. When it became time to thrash the VerHoeven’s grain, which by the way took a month, the sister (Henrietta) that lived at home and took care of and raised my husband, a sister and 2 brothers after their mother passed away when the youngest boy was only 4 years old and my husband 11 years old, became sick. My uncle told them he was sure his niece would be free to come help, so he headed back to Mound City, SD, and I went along back with him. I was there about a month, but that was plenty long enough for both Anthony and I to know there was no one else but each other.

I had to return home where I taught school that fall, winter, and spring. My future husband would come to Mound City, take my folks horse, to let his rest, and drive 10 miles more to bring me home over the weekend. My school was made up of all German children. Some of my pupils were as old as I was – 16 years old. I had a little girl who couldn’t talk American at all. I stayed with the parents of one of my pupils (a German couple). She and I slept on and under feather ticks on our bed. They lived in a 2 room sod house, which was smaller than the one I lived in one the claim. About the time my school was over, my future husband’s same sister got sick again, so I again went up there to work until she was better. I ordered my wedding dress from Sears Roebuck and Company while there, which I still have (November, 1970). We were married at my parents home in Mound City. It was a very rainy day, so only one brother of my husband’s was able to come to our wedding. Even the minister, Rev. Henry Girigh of the Methodist Church in Selby, SD, was about an hour late. It had rained so his old Model T Ford got stuck in the mud; no paved roads back then. My bridesmaid was a sister of another uncle’s (brother to one who found a husband for me) wife. She has passed on, but the groomsman is still alive and living in California.

My husband, Anthony J. VerHoeven was born in a sod house in the then Dakota Territory near the present town of Strasburg ND, the former home of Lawrence Welk. My husband has know Lawrence since he (Lawrence) was a small boy. The town is still very much Germanfied. Even when small children are playing with marbles or other small children games, they talk in German. If you listen to Lawrence when he talks, you can hear how everyone that talks American at all still has a brogue through there are many young people who are teachers, lawyers, doctors, etc. My husband knew him when Lawrence was just a boy.

My husband could only talk Holland or German when he started to school. No American at all. His parents came from the Netherlands when they were small children. In fact, his mother was only 6 weeks old when they arrived in Iowa. His father’s people came to Holland, Michigan, and later went to Iowa also. His father met and married Clara Postuma. They also took up a ‘claim’ where my husband was born on November 19, 1892. There was no railroad for many years so all grain was hauled to Eureliu, about 40 miles away, mostly by ox teams. They also got what groceries they needed when there. He was the 6th of 9 children. Several years later they moved to the large farm where I came on the scene and where the mother and brother Johannas or Joe passed away.

We lived on one quarter of this large farm in a two room downstairs and one room upstairs house, and where our four children were born. The 2 oldest, a boy George and his wife Dorothy and their daughter Alvina and a girl Clara and her husband Everett Wallerman and their daughter Gloria came to Grand Rapids, Michigan. During those terrible dry years in ND (1930). The third child, Anna, was already in Wisconsin going to school and staying with another uncle and his wife and son. The fourth child, Earl, was in grade school when we came to Zeeland, Michigan in October 1939. We spent the winter in Zeeland, then moved near Gregory, Michigan, where I, along with my parents and brother lived before ever going to SD. We lived there for four years, when Anna met her husband, Harold Caskey, whose mother was Earl’s teacher.

In 1943 we moved to good old Caledonia, Michigan. At this date, November 19, 1970, (when I am rewriting this) we have lived here 27 years. Earl was called into Service in 1944. Served his time and went to a Bible School in Los Angeles, California, where he met his wife. They now live in Siloam Springs, Arkansas. They have 4 children – 2 in college and 2 in grade school. Anna and Harold live in Dutton, Michigan. They have 3 children, all married (2 girls and 1 boy) and have 3 grandsons and 3 granddaughters. Clara and Albert (her first husband died some years ago) have 5 children – 4 married; 1 boy at home. They have 11 grandchildren, 3 granddaughters, rest boys. George and Dorothy live in Everett Washington, have 4 children, all married and 6 grandchildren – 1 girl, rest boys – 2 boys and their wives do not have any children as yet. Two grandsons and two grandson-in-laws are in the service. Randy Grinage is now in Vietnam and Carl Patterson is preparing to leave sometime in July or first of August. Anna’s husband is on the kidney machine. He has been ill for some time. All the rest of the children are busy and well. I had a heart attack – anterior coronary, May 22, 1970. Not very strong at this writing, but feel good. Husband well and strong and busy everyday. We are as much in love and happy after 55 years (54 years married) as at the beginning. – Zina M. VerHoeven